If you do a quick Google image search with the words, "The Ultimate Sacrifice" you will be met by a barrage of pictures depicting Jesus dying on the cross and soldiers giving their lives for our freedom. It's actually quite humbling and something we should remind ourselves of and be grateful for on a daily basis. This is not something I expected to encounter while preparing for this blog post, but I'm glad I did.

That being said, I'd like to share with you a completely different type of "Ultimate Sacrifice" that was made for my big brother and me when we were approximately 4 and 8 years old respectively. This was a sacrifice that I will never forget. A sacrifice that I am eternally grateful for and a sacrifice that taught me a life lesson that stuck with me some 30 years later.

I hope that one day when the time comes (and I know it will) I am able to quickly access this memory from the recesses of my brain so I can successfully grab this specific situation by the handle bars of life and make the right decision.

Come, will you?
Step inside my DeLorean.
Allow my flux capacitor to whisk us away in the carpool lane back to sometime around the year 1984. ( I know. I know, I've got to stop with these Back to the Future references. A bad habit I'm trying to break.)

The following is based on a true story: 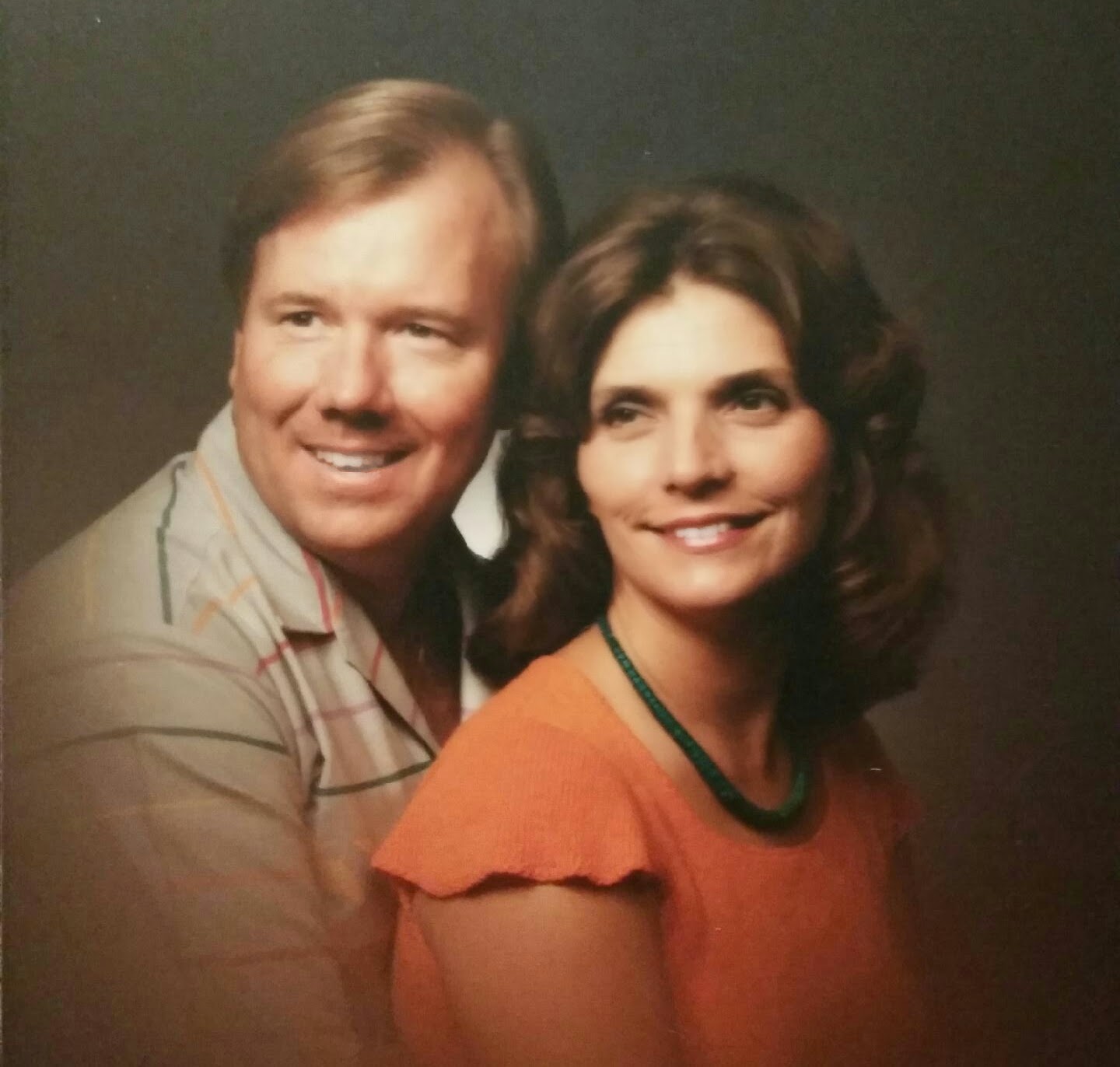 They are both 71 years of age now but I wanted to introduce you to to them back in 1984. As you can tell, my mom was (still is) a beauty and my dad was basically the Harry Styles of his day. Total Dreamboat. A true power couple...like a white Kim and Kanye...

My parents are amazing. I am so grateful for them. Throughout my childhood and adolescence they bent over backward (and sometimes forward) to teach me valuable life lessons. I feel so fortunate that they cared so much about the kind of adult I turned out to be. They invested so much time and effort into me, put my well being ahead of their own and sacrificed so much to ensure that I became an honorable man.

I'd like to share with you this one particular instance that, in my opinion, is the closest thing to an "ultimate sacrifice" that anyone has ever made for me.

One might assume that an "ultimate sacrifice" made by a parent for a child would be giving birth; A mother giving up the body of her youth for the well-being of her child. Perhaps the unconditional love of a mother who moved from the big city to a one red light town and gave up a career as the next Prudential Woman of the Year to stay at home with her four cubs to love, nurture and nourish them daily.

While these are all honorable undertakings. They fall just shy of the sacrifice that was made on a fateful summer day in 1984...

My Dad was at work. My dear mother was watching over my brother, myself and a few other young children she cared for regularly. My oldest sister and her boyfriend stopped by the house in his 1970 Chevelle hot rod. It was your typical muggy Florida summer afternoon. The kind of day that you could just sense the afternoon thunderstorms approaching. Before you could ever see the clouds billowing in through the giant trees, you could smell the rain as it descended upon the damp leaves, dirt and sweet gum balls in the front yard of our Lake Geneva home.

What none of us knew is the fact that we were about to be hit with the storm of the decade in our quaint little town. The storm  was on top of us in a flash. There was no warning; no time to prepare. My mother's sixth mommy sense alerted her to the fact that this storm was not like our typical afternoon thunderstorm. The wind packed an extra punch. The lightning flashed with a fierce fury and the thunder shook the earth to it's very core.

As the bottom fell out of the sky, she ran outside to the front yard and herded us like cattle into the bathtub, which she designated as the safest place in our home. Soon after, branches snapped atop power lines. Power lines lost their battle with gravity and fell to the ground like angry electric snakes striking wildly in all directions. An entire sweet gum ball tree (so big you couldn't wrap your arms around it) a mere 5 feet from our home, was uprooted. It came crashing down like the foot of a giant Tyrannosaurus...right on top of my sister's boyfriend's car.

The storm eventually passed and everyone was okay. The only casualty was the car.

My mother was a local folk hero!!!

Well, that last sentence might be a slight exaggeration...

While my mom will always be a hero to me, she admitted that she really just did what any adult would or should do in a situation like this. She also admitted that the bathtub she put us in was in the corner of the house closest to the tree that came crashing down and if it had fallen in a different direction, we all could have been smashed. Thank God that didn't happen.

If my mom's "heroics" were really just a parent taking the proper precautions for children during a storm with above average intensity, then what is this "ultimate sacrifice" I keep talking about?

Well, that, you see, came a few days later by my father after the crushed car was removed from our driveway and the long neck of this dinosaur like tree remained in our front yard.

What were we going to do with this thing?!?

...I know Mom. Dad always gets to be the hero and it's just not fair. I'm sorry. I even led everyone to believe that you were the hero and yet again, here comes Dad flying in like E.T. on Elliot's bike to  save the day and take all the credit. I understand and maybe there is something I can do to make it up to you in the future. For now let's get back to the story at hand...

Keep in mind that I was approximately four years old at the time and this is by no means a direct quote from my father, but I like to imagine that this is what he said next...Wait! Before I tell you... Did I mention that my dad is brilliant? Well, he is...here goes:

"I'll tell you what were gonna do with that old dead tree sitting in the yard. We're gonna take this here metal ramp, lean it against the tree and the boys can use it to launch themselves over the tree for hours upon hours upon days upon days of fun."

OH!!! We were so excited! It doesn't even matter what happens next. Dad was already our hero just for suggesting it.

There we were standing in the yard. The four of us: Dad, Mom, my brother Stacy and myself.

This was about to be the greatest day of our lives; The pinnacle of fun in my short life to this point here on earth. This storm was the best thing that ever happened to us. This tree was about to become like a family pet; A part of the family. I could envision years of ramping into the sunset before Mom called us in for dinner.

I could hear myself now,

I could even hear her reply,

"Honey, you've been ramping that old tree for hours. This is the LAST time. That old tree will be there tomorrow. It's not going anywhere."

Then, just before I was about to hit that ramp for the first time and fly like Evil Knievel over the Grand Canyon, I heard Dad speak the words that changed everything:

"Hold on Son, let your old Dad show you how it's done."

Brilliant Idea. I told you he was brilliant.

We stood back to let the man do his thing. He circled around to gain enough speed to launch into orbit. He hit the ramp with such precision. He launched into the air like a dolphin breaching beautifully for all to see. He stuck the landing like Kerri Strug on a bum ankle in the 1996 Olympics... 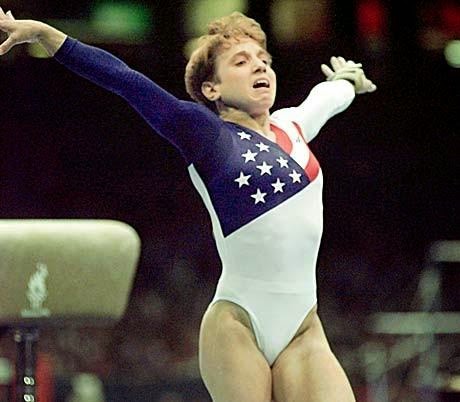 ...Only he was on a bike. When I say he stuck the landing I really mean he STUCK the landing. He slid off the bike seat and completely and utterly... 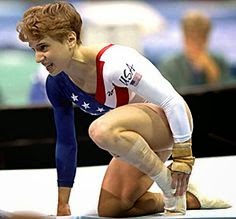 racked his nuts...
like I've never seen before or since.

I was 4 years old. I didn't know exactly what was going on. All I knew is that my dad was DOWN FOR THE COUNT! Moaning, groaning and "OH NO-ing."

As my mom ran to check on her wounded dare devil in distress she paused only for a moment and said six words in a tone of voice we knew not to question.

I don't remember much else after that. The tree was removed before we knew it or it may as well have been. We were forbidden to touch, look at, or think about that tree that almost stole my father's manhood. Now that I think about it, I am the baby of the family. I wonder if that was by choice or if the tree made that decision for them. Either way, I'm glad I'm the baby. Maybe I owe that tree a thank you.

Oh what could have been?!?
The friendship with the tree was over before it began.

Although I've always been seriously disappointed that I never got to ramp the giant tree, I like to think that my Dad saved me and my brother from a few major injuries. It makes me feel  better about the whole thing anyway. He sacrificed his "boys" for his boys, if you know what I mean. That takes an unconditional love that I'm not sure I fully grasp.

Although I know my dad never got flowers, never became America's sweetheart and certainly never got put on the cover of a Wheaties box for this ultimate sacrifice, I like to think that my mom did her best Bela Karolyi impression and carried him into the house to a nice warm bath and some painkillers. 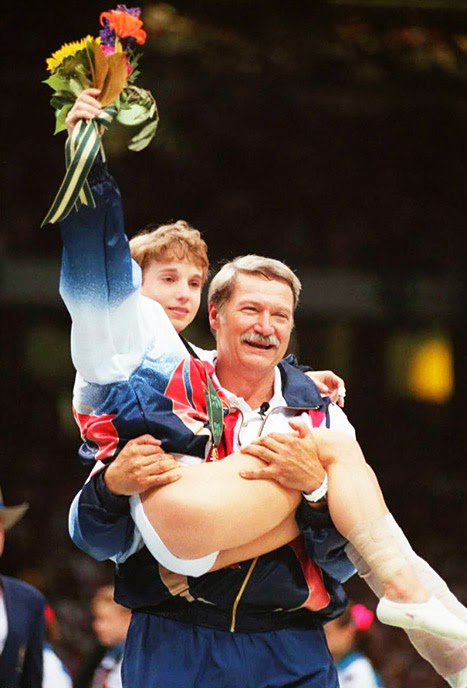 Dad ended up being just fine. No real injuries to speak of.  Maybe just his pride. We realized our dad was not invincible, but he was still our hero. To this day when this story comes up my brother and I just laugh like little kids.

Thanks Dad. (for multiple reasons)

You will forever be to me what Kerri Strug was to our Nation back in 1996...

A Champion who's not afraid to make the ultimate sacrifice.

I wish we were all reading this together. We'd be laughing our balls off... or at least the rest of us would be.

I guess sometimes the most effective parenting tool is the ability to teach a child what not to do, like the dad of the Berenstain Bears. That guy was always teaching those kids what not to do. Let's just hope the sacrifice you make while teaching this lesson is minimal. As a father of two young boys myself, I hope that I am able to resist those, "Let your old dad show you how it's done" moments, no matter how tempting they may be.

Have any of you parents out there had any similar situations?