Welcome to the NFL!

As long as I can remember, the NFL has been a big part of my family. The logos, the helmets, the long standing rivalries, it's all so nostalgic for me. I have memories from a very young age of me, my brother and my dad spread out in the living room throwing the football back and forth while watching a game. My parents would let me stay up late to watch Monday Night Football from time to time when most other kids had long since gone to bed. My dad taught me so much about the game when I was very young. To this day my brother and I can make each other laugh by quoting some of my dad's old NFL films videos.

"In days of old when men were bold and face masks weren't invented,
they ran like hell knowing all too well that sometimes they'd get dented." 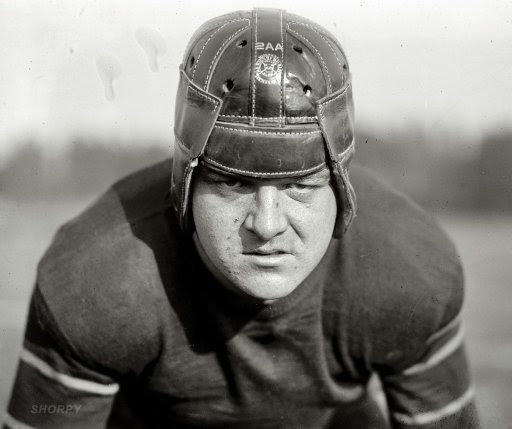 That's just the first one to pop into my mind. We would just lay on my parents bed and watch, only stopping long enough for the VHS tape to rewind so we could watch it again. I'm sure if my mom knew the video used the word "hell" we wouldn't have been allowed to watch it. I guess what mom didn't know didn't hurt her in this case... or maybe she knew but she understood the magnitude of the male bonding that was going on so she made an exception.

I vividly remember my dad playfully tackling me on the living room floor, burying his nose into my cheek and saying, "Welcome to the NFL" in his best tough guy voice. This was a regular occurrence and one of my very favorite childhood memories. It's something I always knew I'd carry on as tradition if I was blessed enough to have sons of my own one day. Sometimes dad would strip the ball away from me and teach me the need to hang on for dear life because "anything goes" on the bottom of the pile. I would just giggle my little heart out. Like all kids, I loved that feeling of running from him knowing that I was inevitably going to be hit with a giant love tackle; Or the feeling of hanging on to that ball knowing it was about to be pried from my tiny little hands. It was incomparable to anything else! There's just nothing like the joy of rough housing with your dad, except for maybe carrying on the tradition with your son(s).  So far I'd say we're off to a pretty good start. 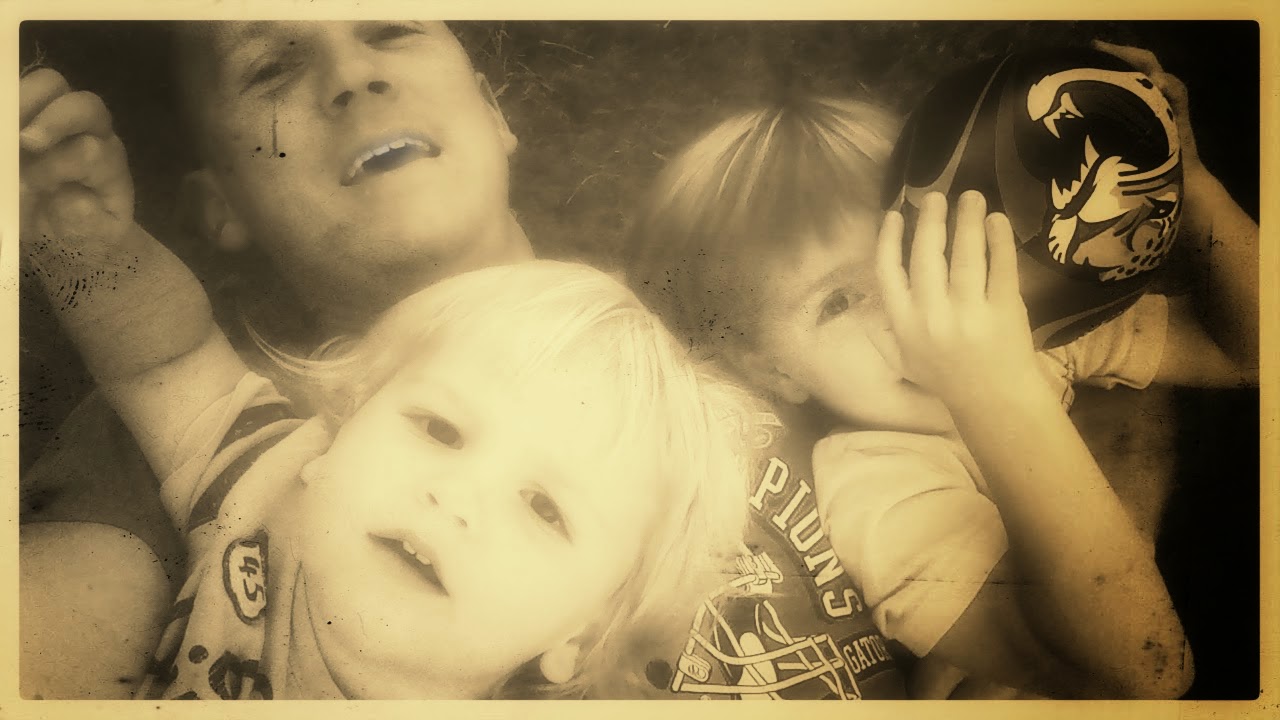 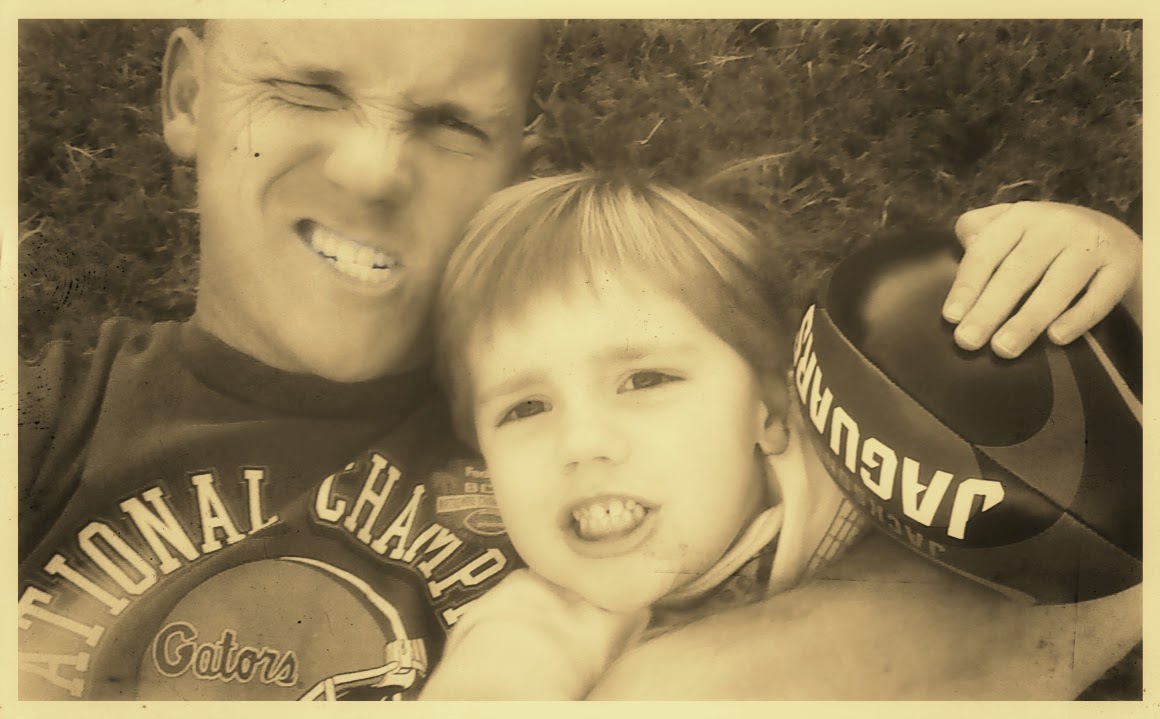 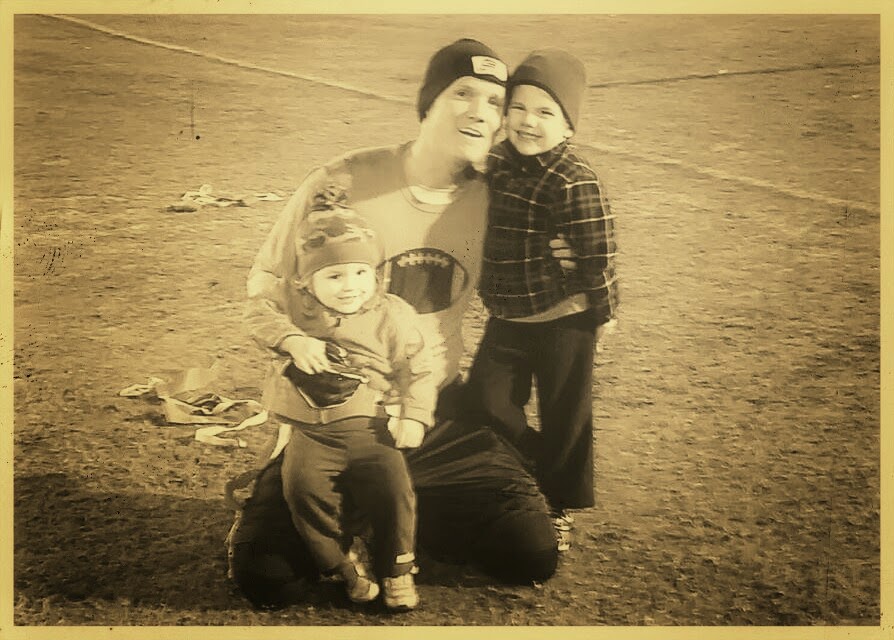 Football is a big part of our relationship already. Don't get me wrong, they don't show much interest in watching the games yet. The most exciting thing about the games is the simple fact that they get to snuggle on the couch with Mom and Dad instead of going to bed on a game night. Scratch that, the most exciting part for them is probably watching Carrie Underwood sing the Sunday Night Football song while trying to sing along.

My oldest son, Cooper, is 3 (almost 4). At two and a half years old he had all 32 NFL team helmets memorized. At this point he didn't know his ABC's. I know. You don't have to say it. Bad parenting. Sometimes I'm ashamed of this fact but honestly, most of the time I'm pretty darn proud of it. After all, before I was a parent I was only a man.

Turns out, a childs brain truly is like a sponge. You'd think they'd run out of space up there but they actually do have room for 32 team helmets among the 26 letters, so many numbers, a few handfuls of colors and the names of approximately 133 animals. I actually used the fact that he learned his NFL teams before his ABC's as motivation and we had the ABC's whooped by 3 years old. Cooper also has this sweet Manning-esque quarterback cadence that he recites like it's the pledge of allegiance. I taught him some of it and the rest came from only he knows where:

You're right. I probably should have taught him the pledge of allegiance instead... but I didn't. However, I did teach him how to strip a football from a ball carrier. Big mistake...

We were at an indoor playground called Bay & Bee about a month ago and he ran up to another child about his age and exclaimed, "I'm going to strip you!" I watched in horror, feverishly making my way from the other side of the room like an outside linebacker in pursuit of a running back as Cooper knocked the poor boys balloon out of his hands. I knew just what was going to happen before it happened but I couldn't get there until Cooper had already raked the balloon from the boys grip and yelled, "FUMBLE" as he jumped on it. Thank God he yelled fumble. The boys mom was standing right there and I can only Imagine the thoughts running through her mind as another little boy told her son that he was going to strip him on the playground.

Thankfully, I arrived on the scene just in time to apologize and explain to the mother that we were in the process of learning when it is and when it isn't okay to strip people. As you can Imagine, that was an interesting conversation. A conversation where I probably came off as an incompetent father. What can I say? You win some; You lose some. I also had Cooper give the balloon back to the boy and apologize as I overturned the call due to the boys knee touching the ground slightly before the balloon came out. This was hard for me to do. It was a textbook strip and I am extremely biased. Upon further review it was the right call; or maybe I just didn't want the boy to develop self confidence issues...could you imagine discovering you have a fumbling problem at 3 years old? That poor boy may have never recovered from that. Plus, Cooper needs to learn that in the cruel game of life you just don't recover every fumble that comes your way. There's a reason why a football isn't round. There's also a reason why the balls of life are oblong as well. Did I lose you in that extreme deep thought? I think we all learned a thing or two from this experience.

My youngest son, Fletcher, is 1(almost 2). He's a work in progress. The only NFL team he recognizes is the Jaguars and his quarterback cadence is, "Red. Green. Hike" on a good day. I'd say it's more Gabbert-esque than Manning-esque but he's getting the hang of it. Thanks to his big brother, he understands what a tackle is and what a fumble is. He's been "stripped" and tackled by his big brother more times than he'd like to remember. I'll take the blame for that. However, I continually catch Cooper talking to Fletcher about football when he doesn't even know I can hear him. We recently started letting the boys fall asleep together in the same bed. Daphne and I just watch them on the monitor. They provide some pretty priceless material. We get to watch for free. You have to pay 10$ minimum for this kind of  entertainment at a movie theatre. I eavesdropped on Cooper quizzing Fletcher just the other night:

Fletcher tried his best to answer every single question. He tried to pronounce every team name that Cooper threw at him. My heart just melted right there listening to my 3 year old and 1 year old laying in bed talking football. I've already succeeded at passing down the tradition...like father like son. Actually, like grandfather, like father, like son, like little brother. 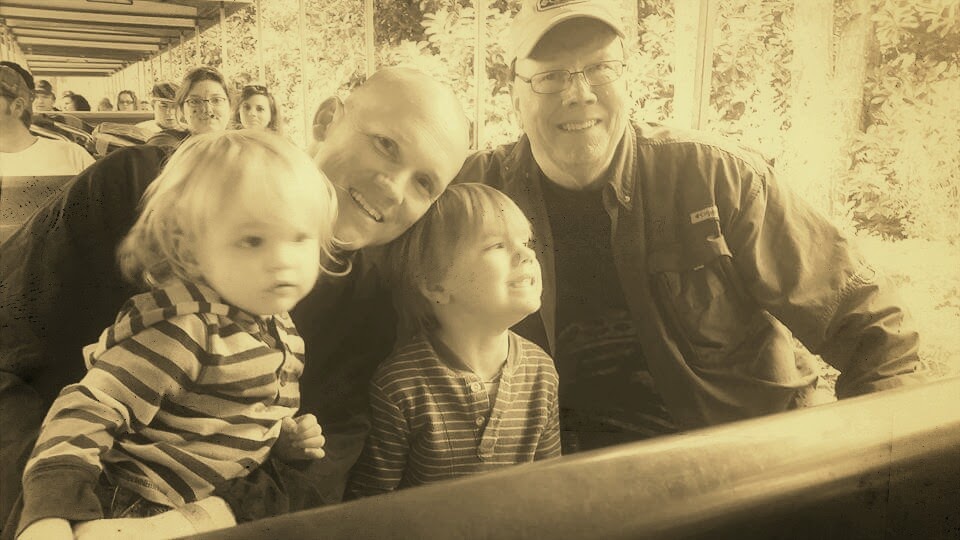 If I had to guess, I've probably spoken the words, "Welcome to the NFL" to my boys a total of 200 times in their short little lives to this point. Those 4 words just have their own special meaning to me. If  you ever want to tell me that you love me but you're the kind of person who doesn't like to say it, just tell me: "Welcome to the NFL!" I'll understand what you mean and we can just carry on like the meat heads we are and nobody has to know that we just shared a moment.


Before my wife and I decided to start our family Sunday afternoons were reserved for tailgating and attending Jaguars games. When the Jags were on the road we'd get together with friends, order pizza and watch the game. Maybe we'll do that again someday but for now Sunday afternoons are reserved for pushing all the living room furniture against the walls and piling up every pillow in the house on the living  room floor. What team are you? I'm a Green Bay Packer linebacker! Welcome to the NFL boys!